This morning I learned that the movie adaptation of my graphic novel
Pyongyang was cancelled. I didn’t have many contacts with the production team
and for two years, since the rights have been sold, I have been informed of
the developments by the internet. I guess it’s the Hollywood way. I
knew that somewhere in California the script was being written and until a
leading actor was picked I didn’t know if it was going to be an animated
feature or a movie. When I sold the rights to a big American production firm
I knew and was frankly happy with the fact that no one was going to ask for
my advice on how to do a screen adaptation.

It’s only in December that things started to get more concrete. It was
announced that Steve Carell would be the lead character in the movie. The
filming was scheduled to start in March in Serbia and I got a phone call
from Gore Verbinski. He shared with me how he envisioned the movie, I was
excited and I feel very disappointed to learn today that the whole thing is
cancelled (I can’t imagine what the producer feels like after working on
this for two years). What saddens me the most are the reasons that lead to
this. One would have imagined that a huge corporation would not bend so
easily under the threats of a group of hackers from North Korea. Apparently
they hit a sensitive nerve. In 2001, a few months after my return from North Korea, I was sending the
first pages of my book to the animation studio directors who had sent me
there. I thought that they would be amused to read how life was in
Pyongyang, where their TV series was produced. The reaction was cold, I was
told that I wasn’t allowed to talk about my stay over there and that my
contract had a confidentiality clause that prevented me from publishing a
book on the subject.

I consulted with my editor at the time, L’Association, where I had published
my first albums. Jean-Christophe Menu the director of this small publishing
house really liked the idea and the first pages of the book. We looked for
the confidentiality clause and couldn’t find it. Finally he told me: too bad
if we end up in court, it’s a book we have to do. 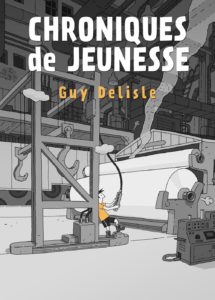